With COVID-19 cancelling the 12 stage relay, a highlight of the running calendar, people were then on the lookout for any type of competition they could take part in.

When Massi Dendani sent an innocent tweet challenging a few local clubs to a virtual race, he didn’t imagine the interest that would follow. Fast forward a few weeks and he had over 5000 runners entering and raising over £10,000 for NHS Charities.

We were able to sit down with the man who started the virtual race sensation and take us through how it came together.

Massi, tell us about you and your running history

Massi - I started running in 2009-2010 run for a club in Essex called Havering AC - ran there till (I was) 18, then went to university in Bedford and started running for Bedford & County AC. That’s where I really started to kick on. I had trained before but Bedford was another level. I remember the first two sessions having my arse kicked.

That's where I really enjoyed it, I ran 1.52 for 800m which isn’t bad. But as every runner tells you, I could have gone quicker.

I fell out of the sport when I moved to London in 2018 and suffered a stress fracture in my hip in 2017 which I struggled to bounce back from. I didn't work hard enough when I was injured to come back properly, but I’m trying to come back again now. 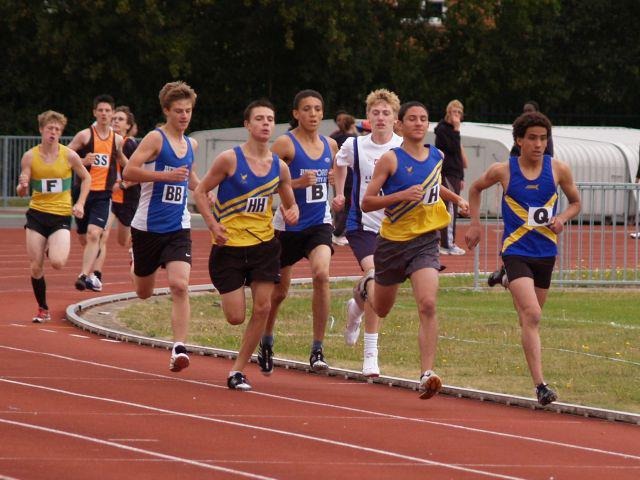 So was the virtual 12 Stage a route back into running and running circles for you?

Kind of. I dip in and out and stay in touch with the Bedford lads. A lot of my friends are within running so I’ve never been completely out of touch with it. So when we (Bedford & County AC) saw two clubs have a virtual head-to-head relay the week before (the original 12 stage date) we thought we’d get involved.

I sent a tweet out to Mark Hookway who is a leading UK coach at Tonbridge, gave him a friendly challenge and just said anyone else that would be up for it. There are some friendly rivalries in the running club world and you know who the good clubs are. Kind of just left it for a day or so and it all snowballed from there.

People started offering their help. Open Track helped with all entries, results and the stats. Those guys helped make it a lot bigger. There were around 5000 entries and 3000 runners which meant it took a lot of time to input the results so it was good to have everyone's help.

Was it always the plan to have the virtual 12 stage or start something new?

Yeah it was always going to be the 12 stage, We’re quite a big club so we could easily have at least 30+ runners turn up. But we never expected to get 3000ish runners. It was a way to keep spirits going in the running world, as all the other big races had either been cancelled or postponed. It was a nice way to get a sense of community going within the running world by creating a virtual version of one of the races that had been cancelled.

How did it work, getting it set up?

Basically two clubs, Herne Hill and Belgrave, raced each other the week before. I then saw it and we said we should try and do it in a couple of weeks when the nationals were meant to take place and get a couple more clubs involved.

I helped with amending a few basic rules and then kept amending it as we went and when we had a higher number of entries. We had people tweet us telling us we should be doing it like this etc. Apart from sending the first tweet I wouldn’t say I was a huge protagonist in the virtual 12 stage. James McCrae really took it forward and was more of an event director.

I was just a fan that wanted to get the ball rolling. If other people hadn't jumped in it wouldn’t have happened.

My idea was you would have one person from each team handling the results and then we would have an update at the end of each day. Thankfully with the Open Track system they could upload the runs and everyone could see it in real time.

Now with Open Track onboard you could record the times properly to make it a competitive race virtually. But how were runners recording their times to race?

Yeah so the actual 12 stage is 12 legs for men and 6 for women. Start with the long leg then the short, long leg is normally around 8K and the short is 5K. Normally you have a group of people there on the day, then you pick your best from that. With that being hard to control virtually, we said anyone could enter by midday the day before and we took the 12 fastest times posted. People also had to run solo as at the time lockdown was stricter. Upload the runs on Strava - then post the link onto Open Track. They (Open Track) would then sort the results out, splitting them into demographics and categories.

Obviously people were going to run different courses, therefore we said that the lowest gradient was -30. You had the odd person that was just running straight downhill, then people would kick off.

People would find a flat short loop and run it five times, Garmin are also notorious for not being very accurate over a short circuit. So we were seeing some peculiar fast times and people would get upset. Ultimately the more important thing was that people were coming together, they were out running and having a good time.

The upsets were what made it what it was, it was good to have something to debate / argue about. It never got out of hand, it wouldn’t have been as exciting and entertaining if there hadn’t been any dramas.

Did the upsets help promote the event and get more people involved?

At that point the entries had pretty much shut when the dramas happened. We weren't too strict though, if people/clubs asked to enter late we let them. We didn’t really need to promote it, the event spoke for itself. Once the tweet had been sent and people started sharing it we had 20 teams signed up quickly.

3500 people actually ran - huge numbers. All from a tongue in cheek tweet. But what's really impressive is that you and the team raised over £10,000 pounds for NHS Charities, how did that feel?

It was awesome. Not sure if there was a pre existing page but we all spoke about doing it for something and it was an unanimous decision. We didn’t really want any credit so we made it anonymous. We then just got it out there, @‘d people on social media and got a load of people behind it. We originally aimed for £3,000 but smashed that early on and pushed on for a bigger number.

Do you think after lockdown, virtual races will still be a thing?

Guess it’s all about innovation, I think the best thing about racing is the crowd, being at the stadium, rubbing elbows with the competitors. That’s what everyone loves about running. The competition, the nerves before the race, waiting for the gun to go then you’re just in that zone. I think the virtual element is good to keep up going now and there are a lot of things to take away from this.

There are ideas for races coming out of it, an idea that you can go down to your local track and take part. You don’t need to travel miles.

Virtual racing as a stand alone event maybe. Nothing beats racing though.

Through The Devil's Kneading Trough